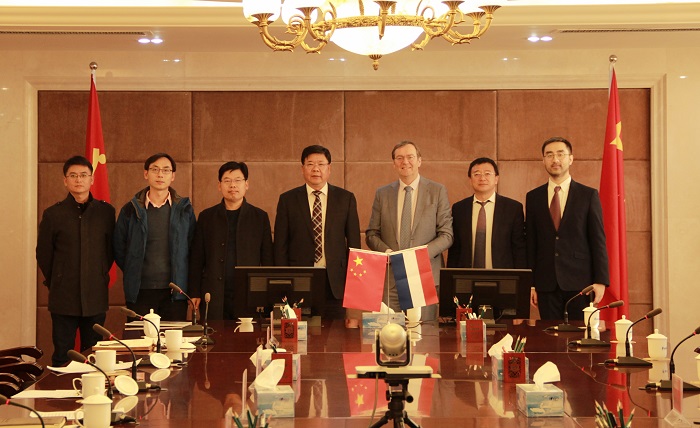 Wang Zengping extended a warm welcome to Professor Peter Wieringa. Wang Zengping said that North China Electric Power University (NCEPU) had close cooperation with TUD. The two universities had many similar disciplines and directions of scientific research, laying a foundation for deep cooperation in personnel training and scientific research. He also said that today’s world was in an important period of energy transformation. In order to solve the problems of environmental pollution, resource shortage and climate change, the Chinese government vigorously promoted the energy transformation and energy revolution. The pattern of energy production and consumption traditionally based on coal had been gradually shifted to that based on renewable energy and clean energy. International cooperation and exchanges were of vital importance in solving the common problems of mankind. TUD was one of the best universities of engineering and technology in Europe. It had strong strength in sustainable energy, electronic information technology, artificial intelligence and mathematics. Then Wang Zengping put forward suggestions on further deepening the cooperation between the two universities: 1. Holding “NCEPU-TUD Senior Academic Workshop” in NCEPU in 2020, to build a scientific research cooperation platform; 2. Developing education cooperation, including joint training projects for undergraduate, postgraduate and doctoral students, as well as active application for funding from China Scholarship Council; 3. Actively applying for the scientific research cooperation projects at China-Netherlands government level. 4. Strengthening cooperation with enterprises of China and Netherlands, to build a bridge for enterprise cooperation, promote the transformation of scientific and technological achievements, and achieve win-win results between university and enterprise. 5. Signing a framework cooperation agreement between the two universities at an appropriate time, to lay the foundation for further cooperation in the future.

Vice-President Peter Wieringa said that he was very happy to visit NCEPU and expressed gratitude for the reception. Later, he gave a detailed introduction to the overall situation of TUD. He quite agreed with Wang Zengping’s proposals, and showed it a good idea to organize and hold senior academic workshops of the two universities, which will be realized soon. Besides, he welcomed doctoral students to TUD for exchange. Finally, Peter Wieringa visited State Key Laboratory of Alternate Electrical Power System with Renewable Energy Sources.

The other members attending the meeting included heads of Institute of Science and Technology, School of Electronics and Electronic Engineering, School of Energy Power and Mechanical Engineering and School of Renewable Energy.